Walking a tightrope on the election result.

Can you trust what you read or see in the media?

More Americans voted than ever before, keen to have a say in the direction of their country over the next 4 years. It is so close that you don’t know who to believe, what you hear and what you read.

Facebook Inc. said that when a winner of the U.S. presidential election is known, its platforms will display a notice for users to help combat misinformation about the outcome.

The company has ramped up its enforcement on disinformation amid concerns about post-election violence. Twitter Inc. permanently suspended an account of Steve Bannon, while Google’s YouTube removed one of his videos after the former Trump White House strategist advocated violence against U.S. officials.

Trump has vigorously questioned the credibility of the U.S. election, though there’s no evidence of widespread illegal voting.

So what does the share market think of the tight result?

A tight Senate race could leave the chamber in Republican control, setting up a divided government that diminishes the odds of huge fiscal stimulus and heaps pressure on the Federal Reserve to loosen monetary policy even more.

Some commentators are predicting a softening of the U.S dollar of up to 15 per cent. “Gold, Silver and Bitcoin have worked like a dream in the weak U.S. dollar environment and has attracted huge client interest,” said Chris Weston, Head of Research with Pepperstone Group Ltd.

Bitcoin’s surge during the U.S. election week has pulled cryptocurrency performance further ahead of major asset classes this year.

What about the economy under a Biden Presidency?

Joe Biden has proposed a tax plan that would indeed increase taxation, but his taxes target the wealthy. He has promised to enact a number of polices, including an income tax, a capital gains tax and payroll tax, the weight of which would fall on people making more than $400,000 a year.

Their tax rates would edge up to 39.6% from 37%. The Tax Foundation estimates that by 2021, if Biden’s tax plan were enacted, the top 1% of taxpayers would see their after-tax income reduce by 11.3%. It will be the middle class that will do all the heavy lifting when it comes to tax revenue.

Biden has also vowed to raise the federal minimum wage to $15 per hour, while Trump argues that such a mandate would hurt small businesses.

Trump often touted a strong stock market before the pandemic. Business-friendly policies and less regulation helped boost the S&P 500 index roughly 60% since Trump won the 2016 election. That’s even after the Covid-19 shock that sent stocks into the fastest bear market on record. The top 10% of wealthy Americans, who hold more than 88% of those shares, reaped the benefits.

Biden has called for taxing capital gains and dividends at an ordinary income tax rate of 39.6% for those making more than $1 million. If Biden’s plans get the green light from Congress, they may weigh on your stocks. Still, experts see global trade tensions easing under Biden, and expect more conventional politicking from him, which could bring stability to markets.

The message for investors is to always stay invested. Don’t make the mistake of thinking that you can time your entry and exit from the market. That is the most important message if you are waiting to see who ends up winning and thinking that the respective parties tax policies will really make a difference to your investment decisions.

If someone invested $10,000 in the Dow Jones Industrial Average starting in 1900, but only when Republicans were president, that portfolio would now be worth $99,000. If that same person only invested when Democrats were president, that $10,000 would be worth $430,000. However, if that investor had stayed in the market the entire time, the portfolio would’ve grown to more than $4.2 million, according to Sonders. 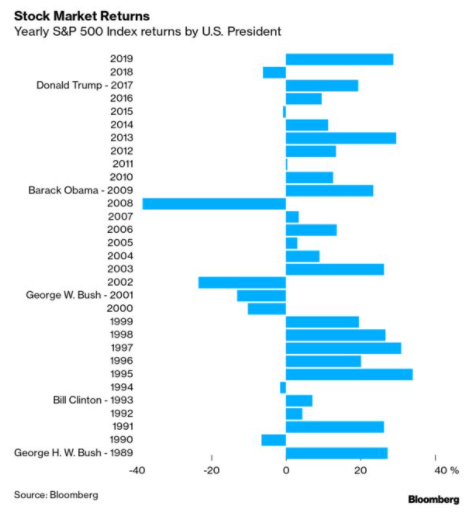