Is Europe going to lead the world into recession‭?‬

Bearishness about the Eurozone macro outlook has increased significantly in recent weeks, driven by a marked deterioration on several fronts. The Eurozone, in particular, is the region of the global economy that is most directly affected by the Russian-Ukrainian conflict and the related energy price spikes (both oil and natural gas). As such, there’s much discussion in markets of a localised EZ recession.

The economy is arguably in the midst of a major energy shock. After two natural gas price spikes in September and December last year, there’s been a third, larger price spike in Europe this month on the back of the Russian-Ukraine war.

There’s a robust case for ongoing strength in the Eurozone economy over the next 1 – 2 years.

Eurozone households have a large cash buffer and are therefore well placed to absorb higher energy costs. In the pandemic, they built up a stockpile of ‘extra’ savings which equate to about €1.1 trillion. That’s the conclusion of our analysis of household income and spending over the past 20+ months.

Various other indicators provide a sanity check for that analysis and, broadly speaking, confirm that the level of spare cash is large. That includes, for example, the sharp increase in household bank deposits, which are approx. €700bn above their trend levels. Of note, if oil and natural gas prices remain at around their average levels of the past 6 months, then the extra cost to households will be ~€220bn this year. While that’s a large cost increase, it would be comfortably absorbed by the high levels of spare cash in bank accounts (of between €0.7 – €1.0 trillion). Or, contextualised another way, households savings rates are still high, at 15% (i.e. the flow of savings, rather than the stock of spare cash). If they normalise this year (as they have in the US), then we estimate that the flow of household savings would fall by €140 billion (cumulatively this year). Added to which, several fiscal support measures are being considered/put in place in key countries to ease the burden of higher energy costs (including income support, tax cuts, energy bill deferrals and so on.

Record amount of cash in the banks to absorb shocks to energy price increases. 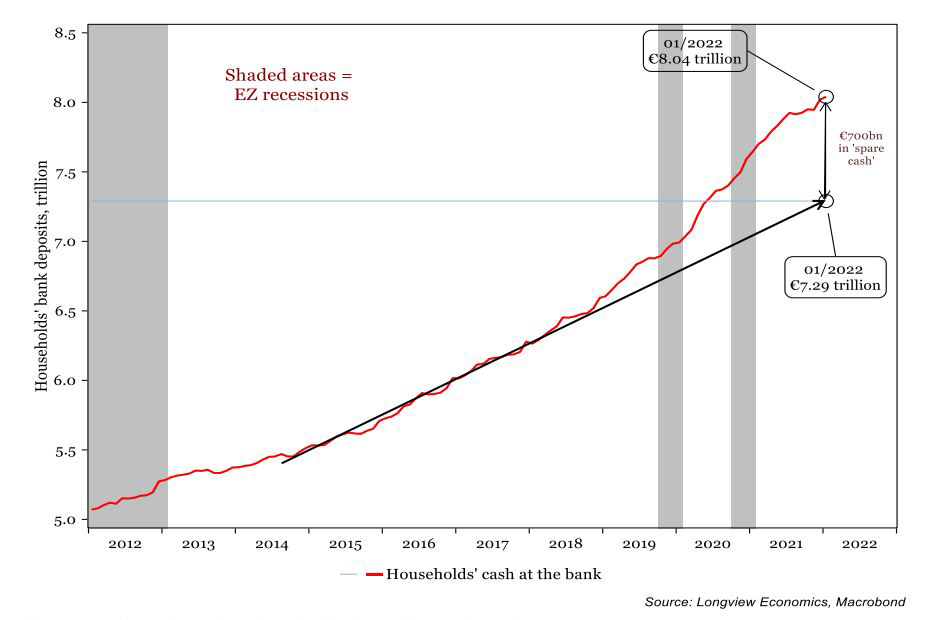 House prices are growing at the highest rate on record in Europe. 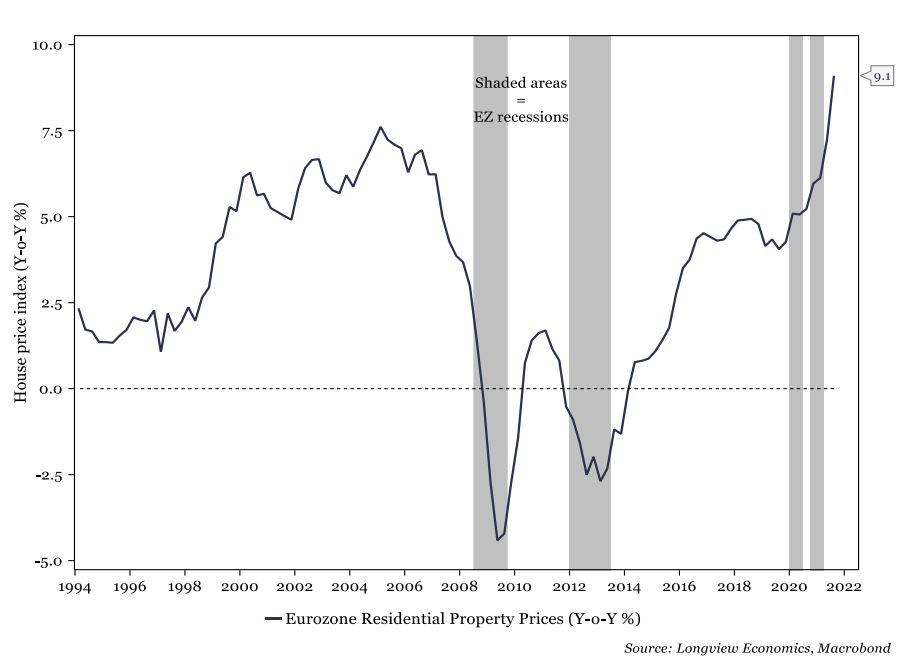 Inflation in Europe is relatively low compared to the U.S.

Underlying inflationary pressure is relatively subdued in Europe (in contrast to the US). In particular, while headline inflation readings are high (+5.8% Y-o-Y in February), core readings are significantly lower (i.e. +2.7% Y-o-Y).

The Eurozone labour market is at record tight levels on several measures. Manpower surveys, for example, show that demand for labour is extremely high while, linked to that, job vacancy rates have accelerated/moved up sharply to record levels. All of which suggests that a move higher in nominal wage growth is likely over coming months.

The corporate sector in Europe is strong

Companies are cashflow rich. Free cashflow in the corporate sector equates to 2.6% of GDP, which is its highest level on record. Typically, Eurozone recessions only occur when companies are running a cashflow deficit. In that respect, recession risk in Europe is currently low. Furthermore, companies increasingly appear to be putting their cash to work and expanding activity. That’s notable, for example, in the labour market where demand for labour is strong. In addition, companies are still rebuilding inventories.

In other words, the corporate sector set up is strong and, on all those fronts, appears to be at the early stages of the economic cycle.

What is the net affect of these measures?

It appears as though markets are still very bullish about the next 1-2 years as we emerge from the shocks over the last period.
Our investment portfolios are geared toward a longer term of 5 years and we are seeing genuine signs of recovery. The above commentary from Longview Economics and the analysis confirms this.

General Advice warning: The content of this newsletter is for the clients of Best Interest Advice and it’s other  related services. The content is general advice only and has not considered your personal situation or objectives and cannot be relied upon. Please consult a financial adviser to provide you with personal advice. We cannot guarantee the accuracy of this information as it is sourced from third parties and general media. All attempts to verify its contents have been made and we only rely on reputable sources. Best Interest Advice AFSL 292925. Financial Choice is a business name registered to Best Interest Advice P/L.